Trustpilot detects and removes 2.7 million fakes, as platform surges to 46.7 million reviews in the last year 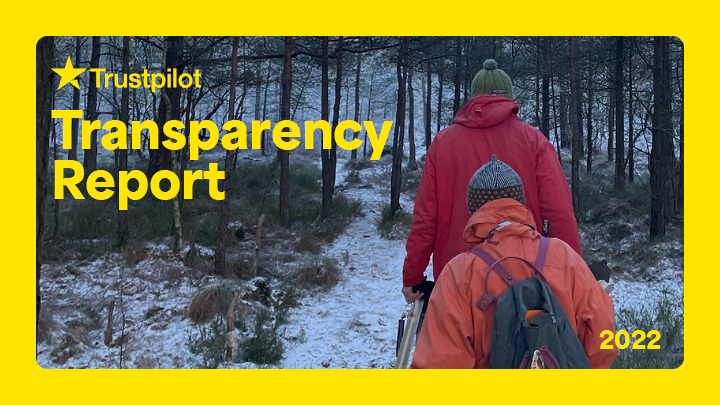 7AM BST - Wednesday 11 May - London,  New York Global review platform Trustpilot has released new data through its annual Transparency Report which reveals a significant increase in the number of reviews left on the platform - up 21% year-on-year to 46.7 million - as advances in its technology has ensured the removal of 2.7 million fakes from the platform (equivalent to 5.8% of the total reviews submitted during 2021).

Data from the report reveals that continued investment in fraud and anomaly detection software has enabled Trustpilot to confidently scale enforcement measures against those abusing the platform through multiple channels.

Of the 2.7m fake* reviews identified and removed in 2021, 1.8 million were detected by Trustpilot’s technology - shooting up 19% in comparison to 2020. Technology improvements also meant that Trustpilot issued 121,048 warnings last year, an almost threefold year on year increase.

As a result of enhancements in Trustpilot’s fraud detection software and automation, the platform was also able to confidently take other types of action as part of continued efforts to protect against misuse. The number of public warning banners (2,637) placed at the top of businesses’ profiles pages - alerting consumers when misuse has been identified on the page - increased fourfold in 2021, whilst 1,425 formal ‘cease and desist’ letters were also issued to businesses breaching Trustpilot's guidelines - an increase of 38% year on year.

The findings are part of the company’s second annual Transparency Report which gives insight into the approach Trustpilot is taking to safeguard its platform as it continues to grow globally.

Reasons businesses were subject to such enforcement action include incentivising consumers to leave reviews, ‘cherry picking’ by selectively inviting only happy customers to share feedback, abusing the reporting tool by repeatedly only flagging negative reviews to Trustpilot, or soliciting fake reviews - all of which undermine trust in reviews and breach Trustpilot’s Guidelines for Businesses.

Peter Muhlmann, Founder and CEO, Trustpilot commented: “It’s clear that consumers value open platforms like Trustpilot to share their experiences and this is demonstrated by the 46.7 million reviews submitted over the last year alone.

“Trust in reviews remains absolutely crucial in order to ensure consumers can make more informed decisions, and businesses can demonstrate their commitment to providing a good customer experience.

“This is the second time we have published our Transparency Report and over the last year we have continued to make significant investments and progress in our detection technologies - helping us to increasingly take more confident action against those who seek to use reviews to mislead consumers.  As our report shows, we’re committed to protecting the integrity of our platform.”

Earlier this year, Trustpilot also announced its intention to issue a series of litigation against businesses, as part of its effort to tackle fake reviews, with any damages paid as part of any litigation to be given to organisations protecting consumers online

The latest to be subject to legal action, following Global Migrate in February 2022, is SO Cameras, and European property company Euro Resales.

Both companies have attempted to mislead consumers through the use of fake reviews.

Carolyn Jameson, Trustpilot’s Chief Trust Officer, said: “Our research has found that consumers are concerned about misinformation online - and Trustpilot remains committed to tackling that problem.

“As the growth of online shopping shows no signs of slowing, we know that both customers and

businesses rely on reviews more than ever, but the way these reviews are collected, displayed and managed varies greatly across the internet. That’s why it’s so important for us to set the standard in trust online - trust and transparency is at the heart of everything we do.”

*Definition of a fake review on Trustpilot (taken from Trustpilot Transparency Report, 2022, p.26)

The type of reviews Trustpilot considers to be ‘fake reviews’ include:

Trustpilot was founded in 2007 with a vision to create an independent currency of trust.

A digital platform that brings businesses and consumers together to foster trust and inspire collaboration. We are free to use, open to everybody and built on transparency.

Trustpilot hosts reviews to help consumers shop with confidence and deliver rich insights to help businesses improve the experience they offer. The more consumers use our platform and share their own opinions, the richer the insights we offer businesses, and the more opportunities they have to earn the trust of consumers, from all around the world.

Over 144 million consumer reviews of businesses and products of over 626,000 domains have been posted on Trustpilot, and those numbers are growing by more than one review per second.

Trustpilot has over 840 employees and is headquartered in Copenhagen, with operations in London, Edinburgh, New York, Denver, Melbourne, Berlin, Vilnius, Milan and Amsterdam.